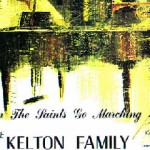 When The Saints Go Marching In

CB cut his teeth on Gospel Music. In 1969, he and his family produced the album, When The Saints Go Marching In.

Later on, he and his four oldest children produced a 45 titled, The Kel-Tones.

CB is best known for his hit recording of Hitching a Ride; Number 14 on the charts in the 70s. He has made dozens of albums with other groups and four single albums.

CB has performed with many popular groups including “The Oak Ridge Boys”, “The Stamps” and “Tennessee Earnie Ford”. He recorded with Elvis Presley’s Band. CB had his own radio show from the Brown Jug in Decatur, IL., his own talk show on WSOY, plus special appearances on TV, State Fairs. Performed for Governors and other dignitaries of several states.

CB also formed a well known group called “The Journeymen”, had his own TV Show, The CB Kelton Show, in Mesa, Az.

He records and produces his own music in his Studio in Apache Junction, Az.

In addition, CB Kelton has recently started a karaoke business as well as playing his own music. Anyone interested in this type of entertainment please email: cbkeltonmusic@gmail.com

Thank you for your interest.

CB invites you to listen to a diverse selection of music -- from his hit, Hitchin a Ride, to his favorite gospel music. Click here to view CDs and singles available.